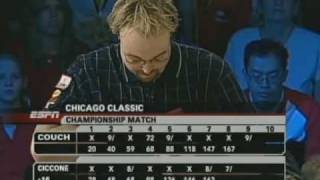 Career: Selected as PBA Rookie of the Year in 2000…Enters 2010-11 seeking his first PBA Tour title after 193 career events…Best Tour finishes were second in Vernon Hills, Ill., in 2005 and Las Vegas in 2008…Owns 13 PBA Regional titles including the 2009 Regional Players Championship...Won Regional Players Championship and a week later regained his Tour exemption for 2009-10 by placing first in the PBA Tour Trials.